Private Function are the new aussie rock heroes as far as I'm concerned, as they encapsulate all that I have ever loved about aussie rock. To be more specific, if you're a fan of the sounds of Radio Birdman, the Sunnyboys, the Lime Spiders, the Celibate Rifles, Cosmic Psychos etc. (you get the idea), and you want even a bit more punk edge, then Private Function are just the case for you. Apart from their brand new single that comes with a smooth video, check out their 2017 EP Rock in Roll and be on the lookout for their next record, like I am.
Posted by Parasight at 10:51 AM No comments: 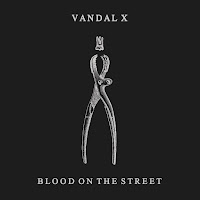 Posted by Parasight at 12:22 AM No comments: 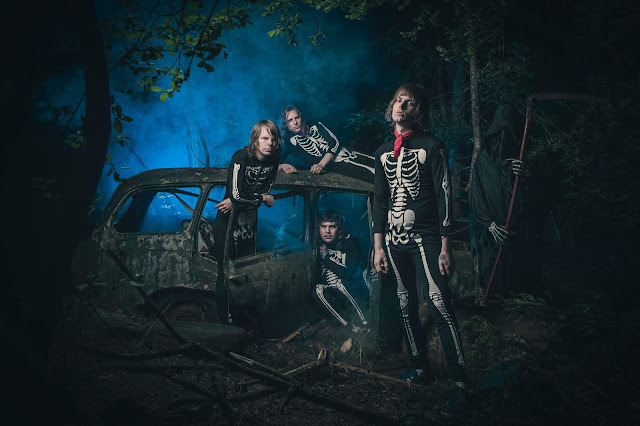 How would "today's top swedish rock 'n' roll band" sound as a title, considering the weight this statement carries? A bit out of nowhere? A piece of shameless exaggeration?


Well, it's true that there is a general outbreak in the rock 'n' roll scene out of Scandinavia and central Europe the last two decades, mainly due to bands like the Hellacopters, Turbonegro, Gluecifer, the Hives etc that emerged in the '90s. Of course quantity rarely goes hand in hand with quality and, although it's a good thing that rock 'n' roll continues to blossom screaming that it's anything but dead, at some point there comes a time that we're starting to have just a bit more than the amount of Hellacopters worship bands we actually have need for. I remember in the '90s when the Black Sabbath sound was celebrated, since they were then 20+ years old as a band and numerous tribute albums were being released amid the general worship. Well, if you think about it, it's 2019 and this is how old the Hellacopters actually are now, so it's no wonder they have reached a god status among today's scene with bands copying their sound and tribute albums coming out here and there (there are two of them being released as we speak, for instance). 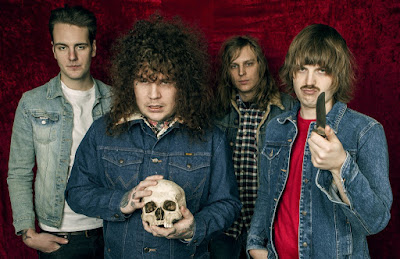 All this introduction was so that I can say that the Dahmers, although swedish rock 'n' rollers themselves, are anything but another Hellacopters copycat band, with their distinct energy and personality characterizing their every song. I can't begin to tell you how happy I was the day I discovered them and realizing what I had found. The Dahmers released their first demo back in 2012, and, apart from numerous singles and EPs, they have released two albums so far, Demons (2014) and In the Dead of Night (2017). But it wasn't until last year when they released Down in the Basement (a compilation of all their tracks off their single and EP releases) that I finally crossed paths with them. Imagine a grown man driving to work in the morning and not being able to stop talking to himself about what a great fucking band is playing from the speakers and that every song coming up is his new favourite. Well, that was me for many days after I put the Dahmers on my car playlist. 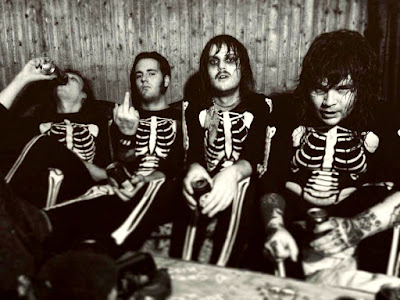 Musicwise, the Dahmers are moving successfully on so many different levels, that the final result, although subconsciously taking your mind to familiar sounds, is anything but worn out or trite. Apart from the horror punk thematic they start off with, they bring you '90s rock 'n' roll, classic punk, garage, blues, '60s pop, all at just the right proportions. How many times have you come across an album with absolutely not even a notion of a filler song? Is it possible that an 18-track album doesn't have a mediocre moment? Well apparently it is, with Down in the Basement. As I said above, every time I listen to it, I literally have a different favourite song, which usually is the song playing each time. Thus, I see no need in highlighting certain tracks, the album's flow is just perfect.


Initially, I was going to wait until the Dahmers have a new release (maybe in 2019) to write about them, since Down in the Basement is a compilation (and this is the only reason why I didn't include it in the 2018's best albums post), but their music still continues to steadily overwhelm me after all these months, and I just couldn't wait for something like that. I really have no idea how else I'm supposed to urge you to get out there and discover the Dahmers, as, if they continue like this, they are surely bound to be the next best thing in the Scandinavian rock 'n' roll scene, and, if they don't, well that would be the definition of unfair. I'm already making plans on catching them somewhere in Europe this summer where they are supporting the mighty Dwarves on several dates, as this is a dreamy lineup I don't see getting over to Greece. If they're playing somewhere close to you, don't even dream about missing that.
Posted by Parasight at 12:55 AM No comments: 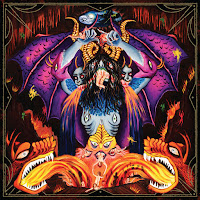 Posted by Parasight at 11:12 PM No comments: 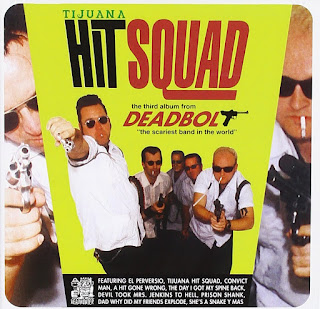 Deadbolt are one of those rare cases that happen to music lovers once every five or so years; they just crashland on you out of nowhere making you wonder where the hell they'd been hiding for so many years before they become a band that defines a considerable percentage of your musical identity as a listener. It was 11-12 years ago when I accidentally stumbled upon them, and I've been a die-hard fan ever since. When this happened, they had already released the greatest portion of their discography which mainly took place in the '90s. Of course, the first step was to get ahold of their albums, which tortured exclusively my speakers exclusively for many days.

Deadbolt (otherwise and at times called "the scariest band in the world") are from San Diego, CA and they play a strange mix of surf/psychobilly which usually moves within lazy rhythms, but the element that makes them stand out are the spoken and usually off-beat vocals, always narrating a story; crime, prison, deadly clowns and voodoo practices are some of the themes that appropriately dress the dark musical background. At times, the band used to feature two bass players on live gigs, who were called "the Wall of Thunder". They have changed numerous lineups during the 25 years they exist as a band. Their discography is anything but diverse but this as a whole is a sound that, if you're into it, you're just into it and you just can't get enough of it, with repetition being anything but a problem. 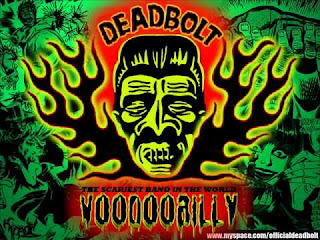 With all that in mind, I could suggest any of their 7 albums from 1992 to 2005, but (maybe accidentally) 1996's Tijuana Hit Squad (re-released on vinyl last year, as it was only available on CD till then) for me comes out as somewhat superior as a whole. Hitmen losers, shankings in prison, a torture session, revenge stories etc. make up a unique atmosphere, like the perfect soundtrack to a Tarantino movie that never existed.

As far as band activity goes, Deadbolt haven't been heard from since 2011 when they released Voodoo Moonshiner and Buy a Gun, Get a Free Guitar (with the latter consisting mostly of re-recordings of most songs off the former) and nothing is known for certain about their status as a band nowadays. That is if you don't count the vinyl re-releases of their classic albums coming out one by one the last years, with Zulu Death Mask's turn in 2019.

Posted by Parasight at 6:29 AM No comments: 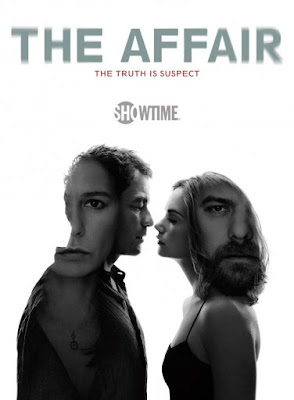 Well, I'm definitely no TV critic but I can surely binge-watch as well and as much as the next guy. Although my thing is mostly crime or sci-fi series, I can always appreciate a good drama; when it's really good.

The Affair is a series that, judging by reviews and friendly suggestions, I always wanted to check out, but that never happened before it had already reached season 4. The first thing that captures your attention here is the concrete performance of each of the leading actors. Dominic West, Joshua Jackson, Ruth Wilson and Maura Tierney each deliver monumental pieces of acting portraying the every-day emotional struggles of regular people. From then on, it's the dry and realistic writing that puts you in the shoes of every one of these characters. Loss, trust, responsibility, betrayal, passion; everything depicted on a scale that makes you think that it can easily happen to you as well. From the trailers, it might come off just as a story of infidelity and adultery but it's so not just that. How safe we feel as long as our comfort zone is not disturbed, where the red line to stop compromising yourself lies, when is the sense of loss too much to bear, how much of yourself you would sacrifice for genuinely loving someone, whether there is ever a time to say that it's too late to just start over; only few of the questions and crossroads the characters face here. The way that the series dives into each character's psyche (using an original method of presenting every event multiple times, through the point of view of every character consecutively) connects the viewer with them in a way that epic series like Six Feet Under have done in the past.

Season 4 aired last year and we're waiting for the final fifth season this year probably. If you managed to catch up in the meantime, you would do anything but regret it.

Posted by Parasight at 4:36 AM No comments:

Email ThisBlogThis!Share to TwitterShare to FacebookShare to Pinterest
Labels: The Affair, TV series 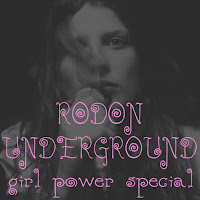 Posted by Parasight at 10:43 PM No comments: 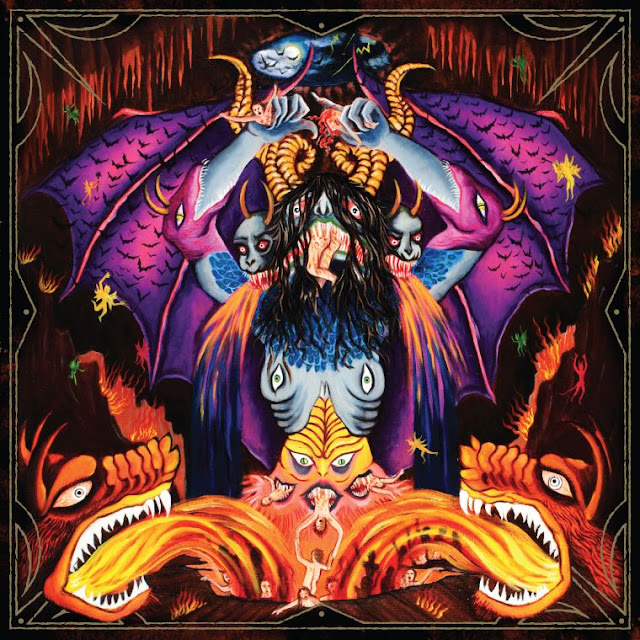 I wouldn't call it anything else but pure coincidence that my next discovery powerfully nominating itself to be in this year's list is again from Philadelphia, PA, like last week's Low Dose. Of course, here we have something that couldn't be more different, as Devil Master are anything but grunge or noise rock. What they are is a unique mix that starts as kind of chaotic, but makes perfect sense as a whole, in an orgasmic way. Satan Spits on Children of Light initially introduces itself as blackish '80s heavy metal, but on the way you get goth guitar leads, old-school deathmetal riffs, punk attitude. I've talked about this record with about 6 or 7 people, and I've got 6 or 7 different impressions when it comes to influences, depending on each one's taste and musical background. For me, it carries a Cradle of Filth atmosphere, a Paradise Lost melodiousness, a Wipers roughness, a Death Breath morbidity; and that's not even the half of it. Devil Master, apart from the theatrical satanic image, bombard the listener with fantastic riffs one after the other, while the omnipresent lead guitar and the abysmal vocals infuse the final result with a trademarked eerieness, finally making them literally incomparable to anything else I've ever heard. And this is no small achievement, given that we're in fucking 2019. I will sound repetitive now, but for me this sounds like it's going to be almost impossible to be topped this year. Then again, we still have three quarters of the year to go... 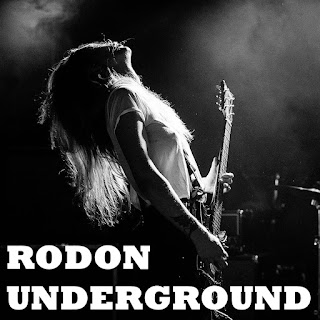 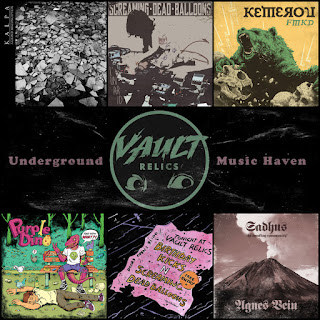